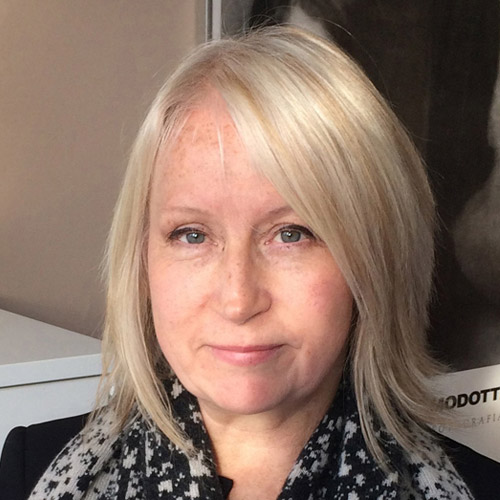 Wendy McMurdo was born in Edinburgh where she initially trained as a painter. She left the UK in the mid 1980s for the Pratt Institute, New York. While studying there, she turned to photography and on returning to the UK, began to work for the first time with this medium.

After completing an MA at Goldsmiths College, London, she was awarded a two-year fellowship by The Henry Moore Foundation. These two years were to prove critical in her development and in 1993 she produced her first major solo exhibition In a Shaded Place. Working for the first time with the computer, she produced a series that explored the intersection between autographic photography and the digital image.

The rapid proliferation of computers in schools provided the context for the development of her next body of work that looked directly at the influence of computers on early years education. Working closely with local schools, she explored the role of the child within the school, the growth of the Internet and the development of networked play.

These projects were shown throughout Europe in exhibitions such as The Anagrammatical Body: The Body and its Photographic Condition curated by Christa Steinle and Peter Weibel for ZKM, Karlsruhe, Germany; Uncanny, curated by Urs Stahel for the Fotomuseum Wintherthur and Only Make Believe curated by Marina Warner for Compton Verney, Warwickshire, UK.

In 2017, her project Indeterminate Objects (classrooms) was commissioned for The Photographers’ Gallery Media Wall in London. In 2015 she was awarded a PhD by publication by the University of Westminster for her work exploring the relationship of children and photography to the computer.

In 2018, she was named as one of the Hundred Heroines by The Royal Photographic Society, an initiative to showcase the best of global contemporary female photographic practice and reflect the amazing diversity of methodologies and approaches of different generations of women working within the medium.

Use the stories around you. Read widely, look closely and be aware of work of others interested in similar ideas to your own. Keep your overheads low but aim high!